The role of buoyant asthenosphere in rifting, plate spreading and mountain building

The force required to thicken crust and produce mountain ranges is not supplied by the plate tectonic driving forces of ridge push and slab pull. I show that the compressive force needed to create mountains can be produce by local thinning of low-density asthenosphere. A long period of subduction can cause such thinning because asthenosphere will accrete onto the cold surface of subducting slabs and be carried to great depths with that slab. Four requirements must be met for mountains to be built in this way: (1) “Normal” asthenosphere must be lighter than underlying mantle by 100-200 kg/m3 and it must be 100-300 km thick; (2) Subduction at typical rates has to operate for 10’s of Ma to thin asthenosphere significantly; (3) Flow of asthenosphere into the region of thinning asthenosphere must be restricted due to surrounding thick lithosphere (or tectosphere), (4) The continental lithosphere overlying the thinned asthenosphere must be thin and weak. The possibility that the asthenosphere is hotter and less dense than the underlying mantle was suggested in the earliest papers on mantle plumes. Numerical models of asthenospheric flow and lithospheric deformation based on the thin sheet approximation illustrate how mountain chains like the Andes can be produced. A corollary of this model is that if ridge capture occurs after a period of asthenospheric thinning then a flood of asthenosphere would pass through the resulting slab window. Numerical models show how such rapid thickening of asthenosphere could lead to the kind of uplift and continental extension that began in the Western United States during the Miocene. 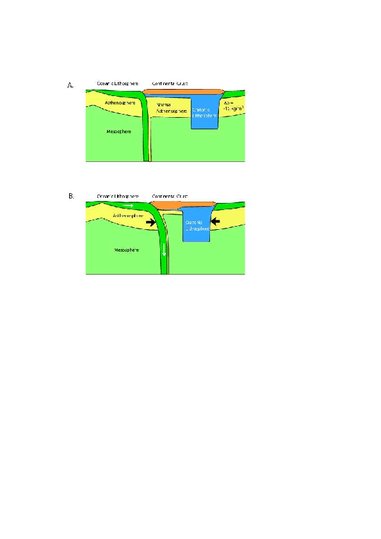 "Principles of geological guided interpolation of point measurements - with examples."